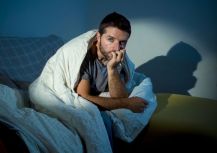 Psalm 4:8 I will both lay me down in peace, and sleep: for thou, LORD, only makest me dwell in safety.

Less than half of Americans get the sleep we need. Of course, some of this is attributed to sickness, a new baby in the home (I can attest to this one!), or other factors outside of our control. But much of our sleeplessness is self-inflicted. Psalm 4:8 might seem like a simple verse, and I’d often skim over it. But I was convicted this morning. My mind immediately wondered to restless nights where my mind is racing, whether in fear, apprehension of the future, ruminating on problems, or other factors that unnecessarily keep me up at night.

If there was one person who had an excuse to let his problems or anxieties keep him up, it was David. He was a wanted and hunted man. He had thousands of enemies. He had been betrayed, berated, and cast out. And yet in the midst of all of it, he could lay down, and sleep – with a serenity and peace that most don’t understand. Why? How? David sums it up in the last part of the verse: “for thou, Lord, only makest me to dwell in safety.” David realized that it wasn’t anything he could do that night that would make him any safer, his problems any better, or his enemies any less. He realized that there was one Person that could – the Lord, and as He said, ONLY the Lord.

When I realize that it is the Lord that keeps me safe, and the Lord Who orchestrates the events of my life, and the Lord Who holds my future, and guides as I seek Him, there’s no reason for long, anxious nights. I can pillow my head in peace. I can rest in full assurance in His hand and in His grace. So – the next time problems, anxieties, enemies, or fears come our way during the “night sessions”, let us turn our eyes and thoughts upward, realizing, as David did, that it’s ONLY the Lord that causes us to dwell safely.