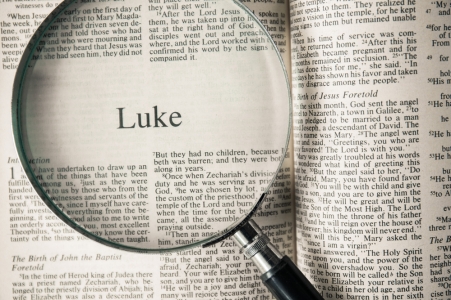 Luke 1:1-2 Forasmuch as many have taken in hand to set forth in order a declaration of those things which are most surely believed among us, Even as they delivered them unto us, which from the beginning were eyewitnesses, and ministers of the word;

It’s hard to isolate one thought in such an amazing chapter. 80 verses. The conception of John the Baptist. The announcement of Jesus’ divine conception. Elizabeth, Mary, and Zacharias. There is so much good stuff in here of faith, fear, belief, and the working of God in the lives of men. But in the midst of that, one brief thought stuck out to me, and it’s from the verses above.

Luke is a great book, and puts a different “twist” on the life of Christ and His ministry. But it all starts in verse two. Luke says that his declaration – the book he would write and the things in it – were delivered unto him by those who were eye witnesses. We see here one of the first instances of “2 Timothy 2:2” being played out, where faithful men take that which they know of Christ, and “deliver it” to another faithful man, who will in turn go and do likewise. Praise the Lord for those who came in contact with Luke, and shared the testimony and Gospel of Christ with him, because we have this book because of it.

The prayer today is that I’d do what these men in verse one did – to make Jesus known to others who will make Him known to others. This is New Testament Christianity.